Pickup trucks are funny things. Many people who own them really don’t need them, a lot of people who do need them use them pretty heavily, and most of your friends will never own one but insist on using yours every time they need to haul something they don’t want to put into their own cars.

I fall in between. I could probably get by without one, but find life in the country a LOT easier with one. I can haul trash to the dump site without having to ride in a car that reeks of old food. I can move dirt, rock and lumber around as I need it to work around the house. I can haul things to the thrift shop that wouldn’t fit in the car. Anything you can do I can do better… I can do anything better with a truck!

For the longest time, I had a decent truck. It was a 1989 Ford F-150 that has seen a LOT of miles. It was my dad’s truck before he bought his newer Silverado. It has been camping, mudding, and on the beaches of the Outer Banks. It’s been fishing, hauling and on vacation. It’s been grossly overloaded with gravel or dirt more times than I care to admit to, WHILE towing a fairly overloaded trailer as well. It hauled a 23 foot boat with no trailer brakes and three nearly flat trailer tires from Richmond, VA to my home. In short, it served me very well over the years, and I have a special place in my heart for that old Ford.

But as with all good things, they must come to an end. Ol’ Red started developing weird electrical problems. I spent hundreds, possibly thousands over the years with mechanics, each one who claimed they had “Fixed the Glitch”. Then one day, on a trash run, Ol’ Red just died on me, right in the middle of the road, with only enough inertia to get us into a gravel driveway.

It was some time before I started looking for a new truck. The intention was to fix the old Ford, but as time went on, fixing yet another problem became a debate on when it was time to stop putting money into the old, worn out Ford and put that money into a newer truck instead, that will, hopefully, be problem free for a few years. As time wore on, going without a pickup became a problem. We were hauling trash in my wife’s new Hyundai. We hadn’t taken the larger things to the thrift shop because they don’t fit in her car. The driveway was developing really bad potholes because I no longer had a way to haul gravel in without paying someone for a dumptruck load. Projects around the house were not being done because we had no way to haul lumber and dirt and mulch.

So I started looking. I looked high and low, to and fro, for a truck that met my special needs. I wanted a V-8. No pansy V6 for me. It had to be Four Wheel Drive. A RWD truck would probably have been fine, but honestly, there are just times when you need all four wheels turning. It had to have a extended cab. The old Ford was a regular cab, and when taking dogs to/from places, that regular cab could get crowded quickly. It had to be full-sized. I liked the idea of a smaller truck, but I know myself, and I know that I’d quickly overwhelm a lesser truck simply because I like loading them up with as much stuff as I can squeeze in. 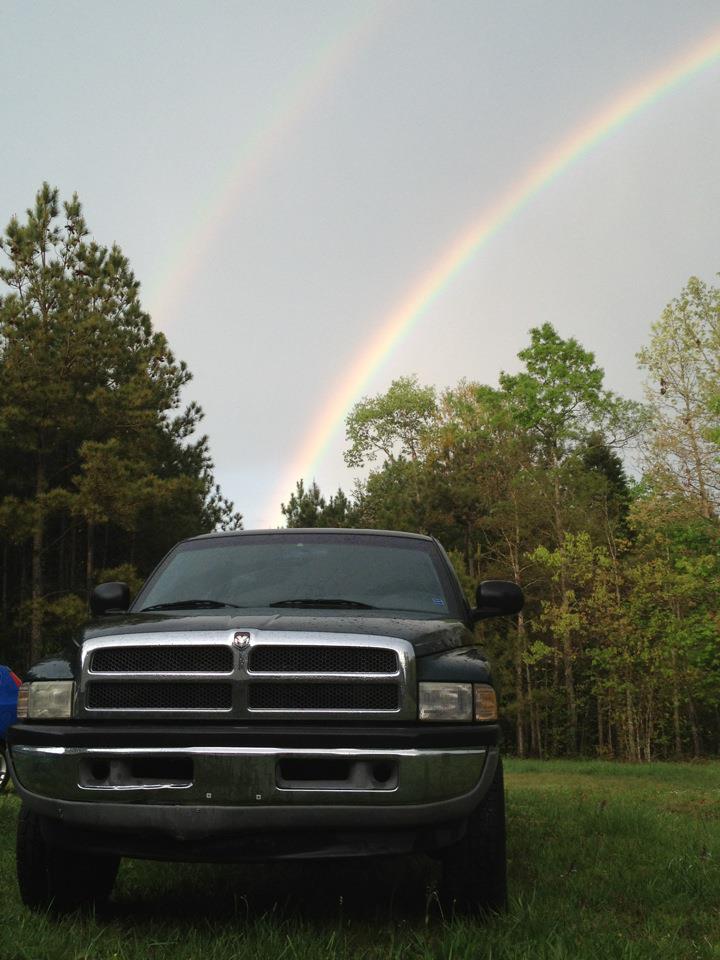 I would love to have picked up a 3/4 or 1-Ton model, but the only ones available in a price range I was willing to pay for a vehicle I’ll drive no more than 4 times a month were either super high mileage (200K+ miles), beat to hell, or both. The ones that DID fit my mileage requirements and all the other requirements mentioned before were way more than I wanted to pay. I’m not using this for my daily work, so I don’t need to spend that kind of money. In the end, I found a nice, used 1/2 ton truck that should do what I want it to do.

It’s got some issues, sure. But they’re all cosmetic. The doors have some rust on them and there’s a rust spot above the exhaust pipe. But the rest of the body is rust free, as is the frame, undercarriage, floor pans, and cargo box. Mechanically, it’s in great shape. There are no leaks around the transfer case or diffs. The axels and joints look good. Brand new Bilstein shocks on all four corners. It shifts smoothly and 4WD works like a champ. 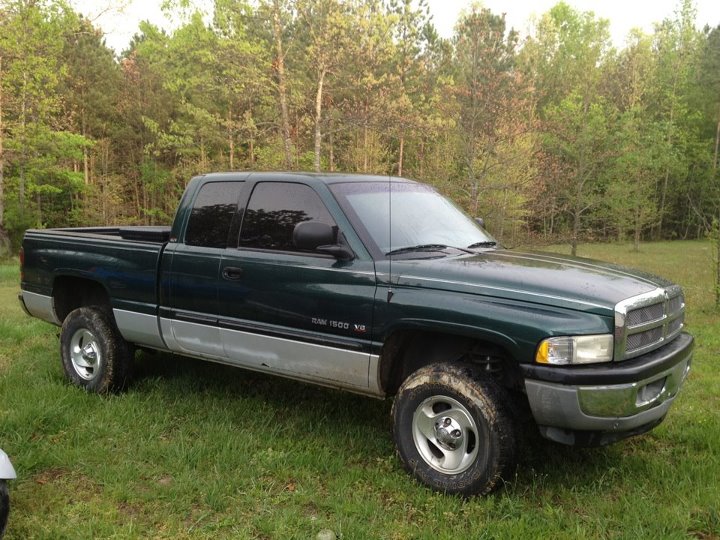 And the best part, it’s the truck I always wanted. It’s a Dodge Ram 4X4 Quad Cab in Forest Green. It’s a bit older, a 2001 model, but it only has 111K miles AND not only has a V8, it’s got a 5.9L (360ci) V8. So welcome New Truck. I’ll be sad to see Ol’ Red go, but he’s destined for Craigslist now. Maybe someone can fix the gremlins and have a decent truck to use for work, farm or whatever. or perhaps his old organs will be used to resurrect another truck or more. But for now, I have a new truck, and I’m itching to haul some dirt, fill some pot holes and get some lumber to fix some things on my deck that have been bothering me. Dana wants some trees and I want some seedlings for the garden. And now we, once again, have a way to haul all that.