Home » Musings » A date which will live in infamy…

A date which will live in infamy…

Today marks the 70th anniversary of the Japanese attack on the US Pacific Fleet at Pearl Harbor, Hawaii. The devastating attack led America directly into WWII after years of ignoring what was happening in Europe and then helping our allies without “technically” being involved by providing them materiel via the Lend-Lease program. 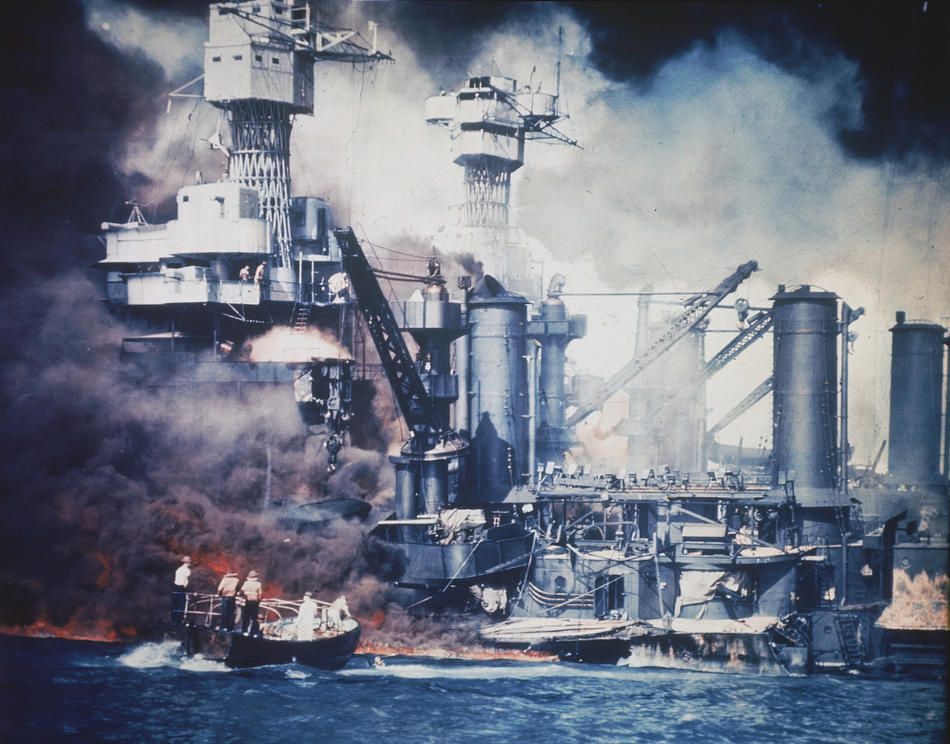 But on this day, seventy years ago, Japan dragged the United States kicking and screaming into a two theaters war that would last until the final surrender on the deck of the U.S.S. Missouri in 1945. It was a war that would span the globe, be fought on many continents and two main theaters. It was a war that brought the US together in a way that has never been seen again. It brought us into the nuclear age and showed us the devastation that we were capable of.It was fought by what’s been dubbed as “The Greatest Generation”, whether they fought on the battlefield, on the sea or in the air. Some fought by building the airplanes, tanks, guns, bombs and other necessities of war. Others fought by buying war bonds and it was at time when “Support our Troops” meant so much more than a yellow magnet on the back of your mini-van.

Yesterday, Dec. 7, 1941 – a date which will live in infamy – the United States of America was suddenly and deliberately attacked by naval and air forces of the Empire of Japan.

The United States was at peace with that nation and, at the solicitation of Japan, was still in conversation with the government and its emperor looking toward the maintenance of peace in the Pacific.

Indeed, one hour after Japanese air squadrons had commenced bombing in Oahu, the Japanese ambassador to the United States and his colleagues delivered to the Secretary of State a formal reply to a recent American message. While this reply stated that it seemed useless to continue the existing diplomatic negotiations, it contained no threat or hint of war or armed attack.

It will be recorded that the distance of Hawaii from Japan makes it obvious that the attack was deliberately planned many days or even weeks ago. During the intervening time, the Japanese government has deliberately sought to deceive the United States by false statements and expressions of hope for continued peace.

The attack yesterday on the Hawaiian islands has caused severe damage to American naval and military forces. Very many American lives have been lost. In addition, American ships have been reported torpedoed on the high seas between San Francisco and Honolulu.

Yesterday, the Japanese government also launched an attack against Malaya.

Japan has, therefore, undertaken a surprise offensive extending throughout the Pacific area. The facts of yesterday speak for themselves. The people of the United States have already formed their opinions and well understand the implications to the very life and safety of our nation.

As commander in chief of the Army and Navy, I have directed that all measures be taken for our defense.

Always will we remember the character of the onslaught against us.

No matter how long it may take us to overcome this premeditated invasion, the American people in their righteous might will win through to absolute victory.

I believe I interpret the will of the Congress and of the people when I assert that we will not only defend ourselves to the uttermost, but will make very certain that this form of treachery shall never endanger us again.

Hostilities exist. There is no blinking at the fact that our people, our territory and our interests are in grave danger.

With confidence in our armed forces – with the unbounding determination of our people – we will gain the inevitable triumph – so help us God.

I ask that the Congress declare that since the unprovoked and dastardly attack by Japan on Sunday, Dec. 7, a state of war has existed between the United States and the Japanese empire.

So today, even if only briefly, take a moment to think about your grandparents. No matter where they are from, it’s highly likely that they were affected by World War II in some way. Think about those who died, the soldiers, the civilians, the six million Jews who were killed in Nazi concentration camps, or simply shot in the streets or in the forests, buried in mass graves or burned in large furnaces.

Think about those people the next time someone says war never solved anything. Going to war stopped the total extermination of the Jewish people. War stopped the German military and Adolph Hitler from taking over ALL of Europe. War brought freedom back to the people who lived in German occupied countries like France, Belgium, Holland. War stopped the Japanese march through China, Malaysia, the Philippines and thousands of other places in the Pacific theater, preventing the torture and murder of millions more civilians.

War is not a thing to be taken lightly, but despite cries for peace, sometimes fighting is the only way so end an evil act, After all, who’s more evil? The evil-doer, or the person that allows the evil to be done without trying to stop it?