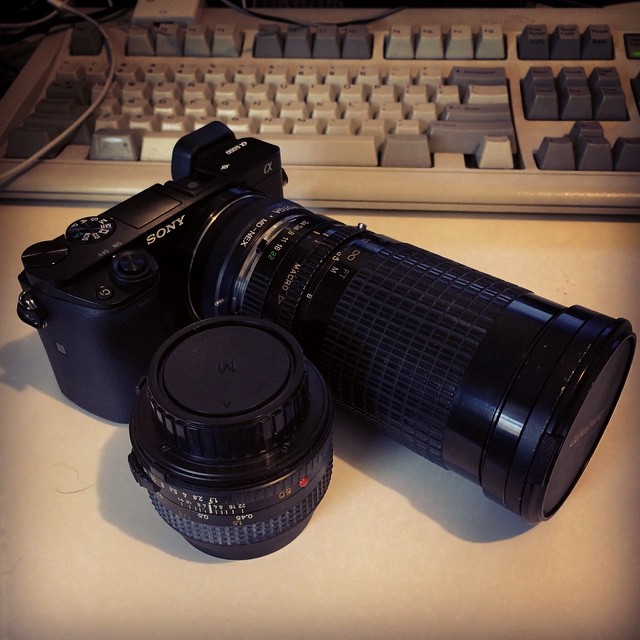 I’ve loved photography since I was very, very young.  Going way back to my first camera, an old Kodachrome 110 to a 126 and an old 60’s model Yashica TL-Electro X 35mm.  Later on I found myself shooting Polaroid because instamatics were just fun and satisfied a need for instant gratification that wasn’t repeated until today’s digital age where photos can be uploaded or shared at the touch of a button.  I’ve dabbled with medium format, pinhole and other 35mm bodies like the Minolta X-700 and Canon AE-1.

Of all those, I only held onto the Yashica and the Minolta.  Eventually I found myself exploring with digital going back to an early Canon Point-and-Shoot that shot 640×480 maximum and required an ungainly cable and horrific software to even get the picture off.  I’ve bought and tossed many small digitals over the years, cameras I’d bought for one reason or another.  Oddly, I’ve only owned one digital SLR, a Canon 350D that I’ve loved carrying around the world, taking pictures of my adventures in places like Taipei, Tokyo, London, Oxford, Prague, Switzerland and around the USA.

But I must admit I started to grow a bit tired of it all.  I found myself more often than not leaving my Canon at home and just shooting things with an iPhone.  The iPhone is not a good camera.  Well, it’s not bad, but it’s not great.  What is IS, however, is convenient.  It’s small, light weight, has a reasonably decent sensor that even if it’s not the best out there, is workable.  What it lacks though, is physical zoom, low-light ability and anything remotely satisfying as a photographer who likes landscapes and architectural shots and panoramics and such.  It IS good for street photography, as evidenced by the literally millions of photos of every day life uploaded to the word on a daily basis.

But because of it’s limitations, I found myself again looking for something better.  Something more professional.  More capable.  But not big and bulky.  I wanted a compact camera with the benefits of an SLR without the weight, yet still capable of using those big, heavy lenses if I wanted.  I really, truly, would love to have a full frame SLR one day, but the size of the things is off-putting as I don’t make a living taking pictures and the cost is astronomical in many cases.

So that set me down the path of looking at Micro 4/3’s and APS-C mirrorless cameras.  They’re small, light but use interchangeable lenses allowing room to grow as well as the ability to shoot in any situation.  They are basically baby SLRs, only no flappy mirror, no giant body, no big battery grip (unless you want one).  They still accept hotshoe attachments (mostly flashes, video light panels and microphones) and can be used for everything from portraiture and street photography to landscapes and sports or action.

After a lot of research, reading and agonizing over details, I settled on the current Sony Alpha 6000, right now the almost top of the line mirrorless from Sony.  The next level up is the A7 II, a full frame (!!) mirrorless less than the size of any full frame dSLR and just as capable.  The a6000 is an amazing little camera.  It’s capable of HD video at 60 fps with amazing tracking AF and lenses with power zoom for smooth transitions from close in to wide.  But I don’t shoot a lot of video at all, and on the rare occasion I do, it’s with a GoPro.  My interest is in the fact that it’s as capable as any prosumer SLR but half the weight and bulk.

The 16-50mm kit lens is underrated in my opinion.  Of course it’s not perfect, it IS, after all, an inexpensive kit lens, but just search around a site like Flickr for photos taken with the lens and you’d be amazed at what it’s actually capable of.  If that’s still not good enough, there are some very well reviewed Zeiss lenses out there that will set you back more than $1K and some in-betweeners as well like the Sony 18-105mm f3.5-5.6.  There are also some very nice primes that get as fast as f2.8 or perhaps f2.

It has a good 24MP APS-C sensor, 129 AF points, great color and contrast, and a basket full of other features.  One thing the Sony E-Mount cameras don’t have, yet, is a very large lens selection.  That’s slowly changing, but there still aren’t as many as you’d find from Canon or Fuji or other companies out there.  That’s where the adapter comes in.

I could have done this with my dSLR, and to be honest it never really clicked in my mind how much fun it could be, but for 14.00 I picked up a rather well built adapter that allows me to attach my old Minolta MD mount lenses to the 6000’s E-Mount frame.  And for the first time, I have actually been giddy, even if I was just taking pictures of junk around my house.  The old 50mm f/1.7 is simply astounding on this camera.  My somewhat cheap Quantaray 35-200mm Macro was surprisingly good, perhaps better than I remember it being.

These are things I will still need to practice a lot with, to get back into the habit of using a purely manual focus lens without any of the benefits of modern lenses, but it’s an adventure I’m looking forward to.  It’s small enough, even if I carry the heavier older Minolta glass that I can carry it around the globe and not feel like I’m lugging a suitcase just for camera gear and electronics.  It’s a far better performer than my 350D and so far I’ve quite enjoyed shooting with it.  I still have my old Canon 350D, but to be honest, the more I shoot with this little Sony, the less and less I feel the desire for a 5D or 1D or larger body.